As thousands of learners flooded schools around the country on the 11th of January 2017, MEC Ravi Pillay rolled up his sleeves as he visited several schools to welcome learners and interact with educators and parents about the preparatory status of their children for the 2017 academic year in the Harry Gwala District. Pillay paid a four-day official visit to seven schools from the 11th -13th of January 2017 as a part of the ‘schools opening functionality monitoring programme’ undertaken by the provincial government annually.

The programme aims to bring the needs of local schools to the government in order that schools may receive adequate support and advisement from government. An executive delegation from the KZN Public Works, the Portfolio Committee on Public Works, Harry Gwala District and UMzimkhulu Local Municipality accompanied Mr Pillay during the entire schedule.

MEC Ravi was highly impressed by some schools’ performance, which obtained impressive results. Amongst schools that excelled was the Mahlahla Secondary School which recorded 94, 7% pass rate from their initial mark of 39, 4% in the previous year. In sharing his excitement and strategy in obtaining such outstanding results, Mr Sibusiso Shezi, the school principal emphasised that the commitment of his teachers, support from the school’s governing body as well as the provincial government with its continued support enabled the school to thrive.

Another school visited was Tshaka Senior Primary, situated at Machunwini location, which had challenges, such as lack of toilets, improper fencing and lack of educator capacity. There are three educators against an outsized number of learners from Grade R to Grade 7. The school’s academic percentage rate ranges from 31, 5% to 41, 4% that the MEC felt were low. “Even though this is a rural area, there is still room for improvement to at least 60%” emphasised Mr Pillay with concern. In the final part of the programme, the entourage wrapped up the visit to Embuzweni Junior Secondary and KwaMvimbela High School.

While every school had its adversities, many continue to produce pleasing results. It is acknowledged and highly commendable that some schools received substantial assistance from the Department of Public Works with renovations and storm damaged projects, provisioning of water tanks like jojos, painting of the classrooms, repairing of gutters, upgrades of security fencing and other infrastructure needs as registered by respective schools. 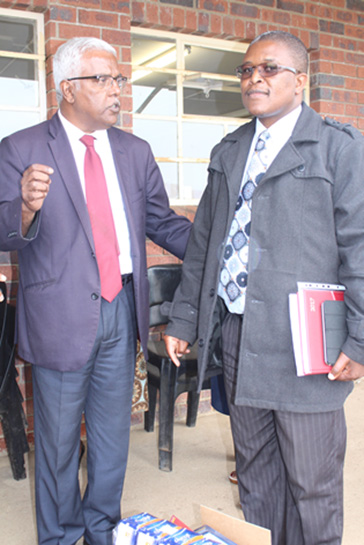 It is a period where one observes a robust interaction between government, schools’ management and communities was at the core of the programme. The programme paves way for commitment, transparency, responsibility and accountability on the part of government with the same measuring standards on the part of school management, parents and pupils alike. If government delivers quality service then the complexion of people’s lives would show a change. Mr Ravi and his formidable team has shown the zeal and zest in ensuring that the school functionality programme remains embedded in the quest to effect quality service to the people of KwaZulu-Natal, especially the youth.